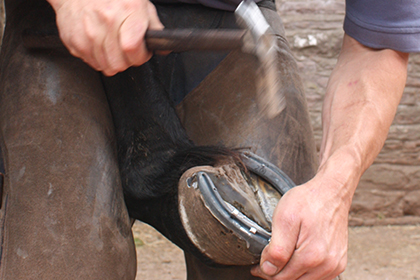 A recent survey conducted by the British Farriers and Blacksmiths Association (BFBA) has highlighted the risks farriers are exposed to during hoofcare appointments.

349 farriers and farriery apprentices took part in the survey; 76% reported a minimum of one injury requiring hospital treatment and 32% reported visiting a hospital three or more times.

In the study, fractures accounted for 42% of the injuries sustained with 56% of the injuries resulting from a kick from a hindlimb. 38% of the respondents reported a lasting physical impairment and 22% required more than four weeks off work.

When asked to consider the most serious injury sustained, 31% of farriers felt that it could have been unavoidable. Being prewarned of known behaviours (22%), improved handling (46%), a better environment (30%) and sedation (41%) were among the recommendations suggested for potentially avoiding accidents. 60% cited misbehaviour as the cause of the injury sustained.

Norfolk farrier, Mark Aikens BSc (Hons) FdSc DipWCF lost a finger when it became trapped under a hoof during a routine appointment on a horse that he had cared for since it was a foal. “Having sustained a career threatening injury has made me prioritise safety at each appointment I attend; the horse’s wellbeing and an optimal shoeing/trimming for that horse is my priority. Communication between farrier and client is vital in reducing injury to the horse, handler and farrier and I strongly advocate that all parties are in agreement to achieve this with the horse’s welfare being the prime concern.”

The Farriers Registration Council Code of Conduct (2021) states: “Farriers are advised not to commence or continue working with an animal if it is felt that the present temperament of the horse, or the conditions the horse is kept in, are unfavourable to a successful outcome and/or that the health and safety of the farrier or others, including the horse, may be compromised by proceeding.”

Craig D’Arcy BSc (Hons) AWCF, President of the BFBA, is “concerned but not surprised” by the results. “We know that injuries sustained whilst shoeing and trimming horses can be devastating, with many having lasting, long-term implications for farriers. The findings will provide the basis for a campaign in which the BFBA aims to highlight the risks – educating both farriers and the people caring for horses and ponies on a daily basis – helping them create an environment where optimum hoofcare services can be provided safely”.